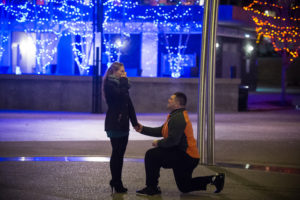 It’s after the 1st of the new year and it’s gosh darn windy and cold in Columbus, Ohio.  The furthest thing from my mind is photographing outside. My fingertips can hardly withstand the moderate temperatures in the frozen food section of the grocery store! But when I received a phone call from Rachael asking me to photograph her best friend’s surprise marriage proposal and I could hear the excitement in her voice for “her best friend’s” special night, I immediately wanted to participate.  Rachael was coordinating this special event for her best friend and her boyfriend. . . or so she thought.

We had agreed to meet one weeknight in downtown Columbus outside the “Jewel of the Mile” , Milestone 229, a restaurant known for it’s incredible views.  While I tried to convince her that a marriage proposal would be much better inside the warmth of the bar, she believed her best friend would prefer to be proposed to outside, yes in the wind and cold, near the beautiful holiday lights where it was more scenic and private.

What she didn’t realize though, was that she was planning her own “surprise marriage proposal.”  She believed she was assisting her best friend and her boyfriend with their proposal event. . . not her own.  Pretty clever fiance right there!

So I stood outside, testing my settings on my camera, ran back inside the restaurant to warm up and returned once I saw them walking outside near the lights to enjoy the view.  A few minutes later, while she was waiting for her best friend to be proposed to, Rachael’s boyfriend dropped to his knees and asked Rachel to marry him.  While it could have been warmer for me, I don’t think Rachel minded keeping her gloves off while he slipped the beautiful ring on her finger!

Thank you, Rachael, for doing your homework and finding me to photograph the event for “your friend”!  It was a heartwarming evening for all of us! 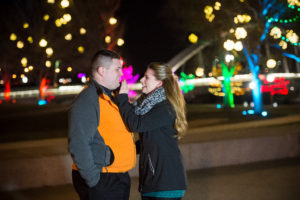